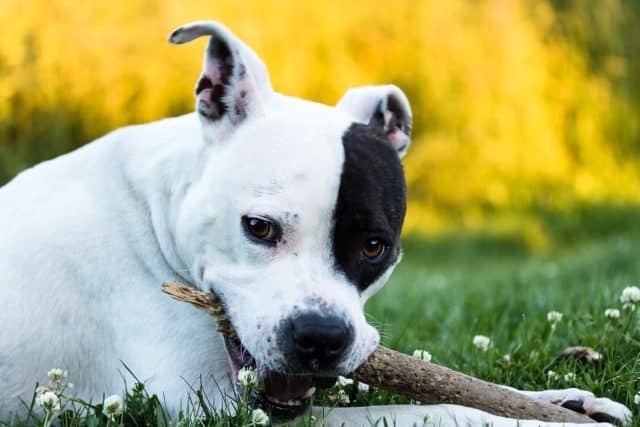 Noelani Guerrero has been fostering dogs for years now. Later on, she decided not to bring anymore fosters in her house because her house was already full. But when someone contacted her and sent her videos of a pregnant pit bull, she couldn?t say no.

When Noelani first saw April, she was acutely malnourished and ready to pop her babies. It also seemed like she had huge trust issues with people because she looked scared and timid. No one knows what happened to her and what she?s been through.

After a few days, April had her babies. She was very caring to her little ones, especially with Andy. She knew that he needed extra attention.?Andy?had a lot of health issues and very underweight.

Mama Moo embracing full neighborhood dog lady status with this amazing @popyourpup shirt! Just wait to see daddy moo in the @popyourpup Bessie print! April is wearing her matching @petalsandpawprints watermelon bandana and @dogplusbone accessories. You can win a @popyourpup $150 gift card, @dogplusbone leash and collar, and @petalsandpawprints bandana! We?re keeping it simple. Here?s how: ?The first 50 people to donate $25 or more to @animalcompassionteam receive a Prilly Package including a postcard, sticker, and magnet! (You will also be entered to win one of four prize packages) ?Donate $10 or more to @animalcompassionteam or a rescue of your choice, and you will be entered to win one of our four awesome prize packages! Every $10 donated is an entry! ?EVERYONE who donates will receive a Prilly thank you postcard! ??To receive your Prilly postcard OR Prilly Package prize, AND be entered to win our prize packages send us your receipt at minimoos.atx@gmail.com with your address and Instagram handle! HUGE THANKS to all of our amazing partners that love and support rescue like we do! @Luvabullz @dogplusbone @pawscout @oneheartcoffee @avanailpolish @petalsandpawprints @k9bathbuddy @bumbleandhound @popyourpup

April remained scared of everything. But her foster mom was very eager to get her trust back. She wanted to win her over. And Noelani?s hard work paid off. Day after day, April was showing that she was ready to trust people again.

The time came when she?s already allowing Noelani to pet her and give her cuddles. And after some time, April was finally ready for hugs. She started wanting to be around people again. She even likes to be called pretty.

Eventually, all her puppies got adopted, even Andy! And for April? They were clueless that the perfect family has been watching her journey all along. Vanessa and Justin Olson have been following Noelani?s story about April since day one. But they knew how popular she was so they didn?t know if they will get the chance to adopt her.

Step 1?? Step 2?? Step 3?? These two missed each other SO MUCH while we were out of town the past few days and they were staying just a few homes apart (thanks @minimoos_gma and our awesome neighbors for taking such good care of them). I couldn?t find April anywhere and then I realized she was in Bandit?s crate. The love that these two have for each other is just the best?? . . . . . . . #minimoosatx #prilly #caninesofaustin #atxdog #dogsofatx #dogsof512 #caninesofaustin #crueltyfree #pitbullsofatx #pitbull #pitbullsofinstagram #muttsofinstagram #adoptdontshop #lovernotafighter

Vanessa has been obsessed with April. She has been checking on her every single day. On the day that they got the approval for April?s adoption, Vanessa couldn?t contain her happiness. She?s in awe after hearing the news.

The couple drove all the way from Austin to Fresno, CA just to pick her up. It was a long drive, but it?s definitely worth it. They were thrilled to finally be with April.

When they got home, April immediately made a bond with their other dog, Bessie. They became best friends right away! Now, April is living in her forever home, and she?s so happy about it. She has transformed from a terrified dog to a very playful and loving one.