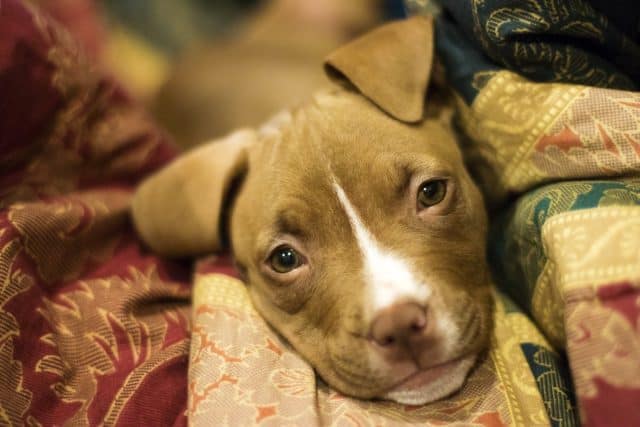 Chris and Katie Downs brought Leo, their 6-year-old son, for what they said was a routine errand. They were going to donate some supplies to a building. Little did the kid know that he?d be getting the surprise of his life: the building that they stopped by, Stray Rescue of St. Louis.

The family lost Mellow, their beloved dog, just a few months ago. He was 13 years old. Katie said that Mellow is a top-notch dog who truly loved them and everyone that he meets. She said that her husband takes their dog wherever he goes. So, almost everyone who knows them knows their dog too.

Oh Mel…you taught us so much. Can?t find the words fella….THANK YOU with everything we have for being an…

Mellow stayed by Katie?s side when she was pregnant with Leo. He also showed the same devotion when Leo was born. Mellow was right next to Leo?s side wherever the little kid was. The two even shared a room where Mellow slept at the bottom bunk.

So, when Mellow passed away, the family was heartbroken. They made a ?no dogs policy?. However, Leo wasn?t happy with the plan. He begged to have another dog.

This family came in with donations after their family dog passed away. What they didn't tell their son was they also adopted a puppy and surprised him. Grab the kleenex! ????

Slowly, the couple gave in to their son?s request. They started searching for a new dog at the Facebook page of Stray Rescue of St. Louis. This is where they saw Nutty-Buddy, a 9-week-old pit bull mix.

Katie said that Mellow and Nutty-Buddy has such a considerable resemblance. She showed the dog?s photo to her husband, who immediately decided to apply for the dog?s adoption. They kept their plan a secret until the day when they were about to pick up their new dog.

The best experience ever!! You guys made our day but more importantly you made our son Leo?s day in helping surprise him with Nutty Buddy! Thank you!

When they arrived at the shelter, Leo followed on his parents. Then, one of the rescue?s staff came out with a puppy. Leo couldn?t believe it. The little boy was in tears. Fortunately, the shelter?s staff were able to record the touching moment.

Chris Downs said that they?re happy that the special moment was captured in a video. They love watching it. Leo and Nutty-Buddy instantly became the best of friends. They love playing and snuggling together. He?s still too young and small now, but soon enough Nutty-Buddy will claim the bottom bunk.